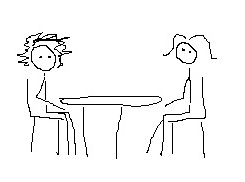 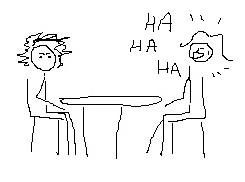 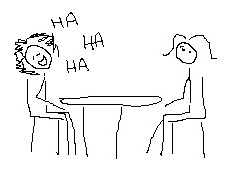 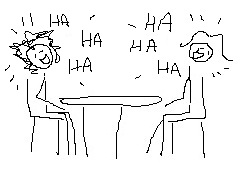 Why are they laughing so hysterically? you ask. It’s really not that amusing a topic. Mortimer has dyed her hair and Bilbo is commenting on it. What’s the joke? Have I missed something?

Now look at the following conversation if it were to take place on Facebook:

Recognise that? Of course you do. Because that’s the sort of ordinary, mundane conversation that apparently makes people LAUGH OUT LOUD. ALL. THE. TIME.

It doesn’t happen does it? Of course it doesn’t. So why write it if they’re not laughing out loud? I bet 99% of the time they’re not even SMILING when they write it.

I know this is an old argument,  but it just really gets to me. Save hysterical laughter for when really funny things actually happen. Don’t pretend you’re laughing at the everyday tedium of life. Unless someone falls over a monkey or does a little fart during a sneeze, it’s just not worthy of laughing out loud.

And don’t even get me started on LMAO. Do you know what word you get when you rearrange those letters? LAMO.

Yeah. Think about that.

6 thoughts on “Becky says things about … the incredible over-use of LOL.”