Now of course we’re all tremendously excited about the Olympics, it’s going to do wonders for London and the economy, we’re proud to show off our city and our lovely little English ways of doing things. But please – please – can we stop labeling

as the Official This, That and the Other of Bloody London 20 Ruddy 12???? Do we need an Official Television of London 2012? An Official Drink of London 2012? The world’s gone sponsoring mad. My bottle of Evian is apparently the Official Bottled Water of Wimbledon. Now I know that’s a nice bit of variety, and those thirsty tennis players will need to keep hydrated, but COME ON.

(I was going to make a joke about what would  happen if Thames Water jumped on the band wagon, but they only ruddy have! And you thought you were just drinking a normal glass of tap water – oh no, you are officially imbibing the Official Tap Water of London 2012.) 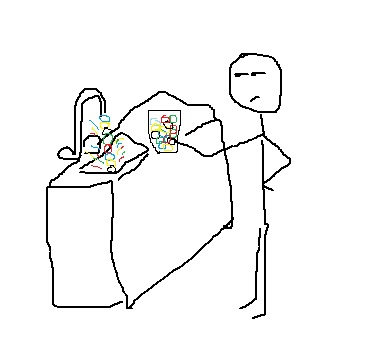 I mean, when is it going to stop? The potential is almost frighteningly infinite. And why stop at sporting events? Why doesn’t everyone else get involved? The Official Pencil of the Society for All Artists? The Official Icing Sugar of the WI? The Official Socket Wrench of the AA? The Official Walk-Across-Some-Fields-and-Over-Some-Well-Signposted-Stiles of English Heritage?

Nothing is sacred anymore. Nothing.