Some people have their daily routines – buying a morning coffee, reading a paper in the park, cutting their egg sandwich into eighths, killing kittens – and I have mine. I fall over. Daily. It has become so normal that I swear sometimes I don’t even notice. 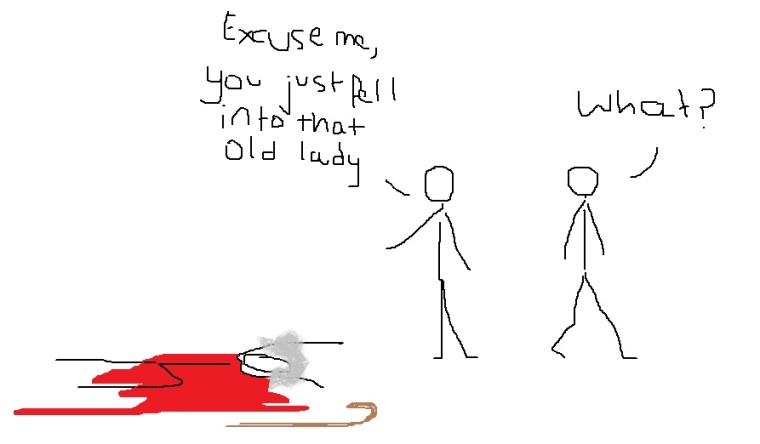 So, in case you can’t believe that a reasonably able-bodied person can be an oaf of phenomenal proportions, here are my top four falls of all time.

After a heavy rainshower one summer’s day, the sun came out and I decided to go for a walk. So I put on my flip flops, and flip flopped on my way. I crossed the road round the corner from home, stepped gingerly onto the very, very slightly-inclined bit of pavement, slipped on the wet  concrete, and fell on my face, right in front of the packed 71 bus that was at that moment driving past. I can only hope that my shame and pain caused them mirth.

One of the corridors in my secondary school had a staircase that had a deep-set windowsill at the top. Many an adventurous young maiden would leap off the top step, swing off the windowsill, and land deftly on her feet a few stairs down, then continue on her way. I had done this many times without incident or scrape. I was intrepid. I watched Gladiators. I knew what I was doing.

One afternoon my best friend and I were late for class and were casually strolling through the empty corridor. We turned the corner. There were the stairs. There was the windowsill. You’re mine, I thought. I’ve had you before and I’ll have you again. I swung my bag over my shoulder, took a leap with the agility of a springbok, reached, reached for that windowsill, and missed. Nowhere near. Nope. Nothing. Flew through the air, crashed to the stairs, and rolled all the way down to the bottom where I lay for a good few seconds, not quite believing that I was inhabiting a body that was quite so stupid.

Forget everything you thought you knew about falling over. This is the fall that changed the landscape of falling over forever.

It was summer. Euro 2004 was on. My friends and I were in The Kingston Mill pub. England were playing. It was packed.

Here is an illustrative map to demonstrate the layout: 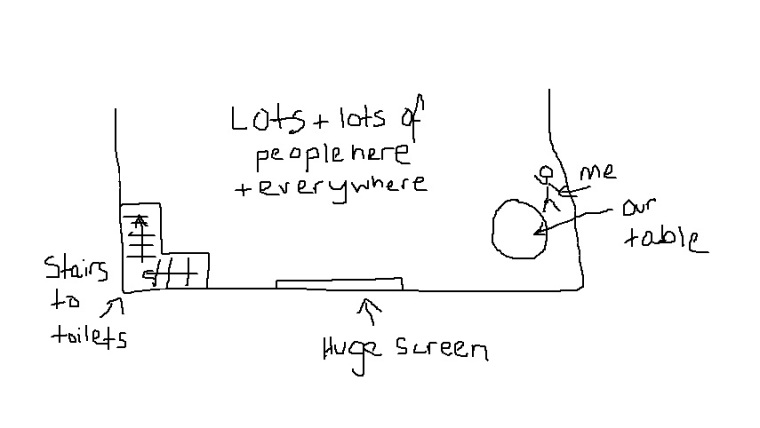 It was two minutes before the end of the second half. I needed the toilet. I assessed the situation from our table: there were people sitting in front of the big screen: I would have to niftily step over them in order to reach the stairs on the other side. That’s fine, I could do that.

One minute to go. I prepared. I thought Go, now, before half time begins and all the girls rush to the toilets.

I got up. Stepped over to the screen. The huge screen at which about 200 people were staring. I stepped right in front of the screen with an apologetic smile to the 200 people whose view I was currently blocking. There was a pair of legs in front of me. It’s okay: I had prepared for this. 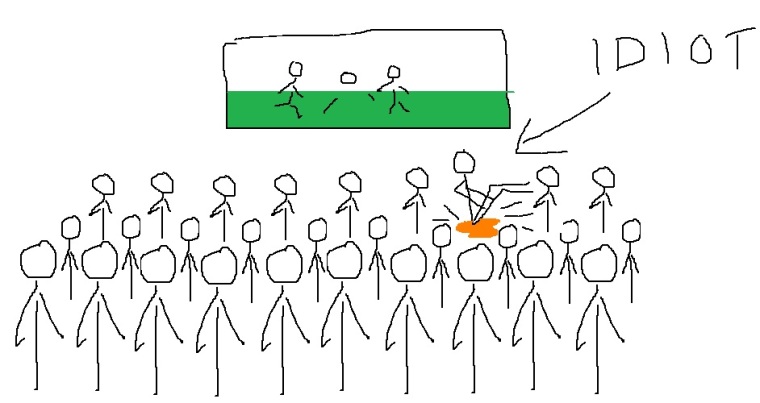 There was a split second of total silence as the stunned pub digested the fact that possibly the best thing that could ever happen had happened, and then there was the roar and the chants of ‘SHE FELL OVER!’, and there was literally nothing I could do, but stand up, smile, give a cheerful wave to my adoring fans, and continue my way to the toilet, where I stood in front of the mirror and shook my head at myself for about ten minutes.

So there you are. A comprehensive illustration of how one reasonably intelligent person can make a monumental knob of herself on a regular basis.

73 thoughts on “Becky says things about … falling over”