I recently made a throwaway confession on my Facebook page which went thus:

Porridge is revolting. There, I said it.

The comments I received were so numerous and passionate in their defence of porridge (good book title, that: In Defence of Porridge. Hands off, that one’s mine) that it rather took me aback. It also pleased me greatly that I had done something I don’t normally do: made a controversial statement. It made me feel quite the new woman. 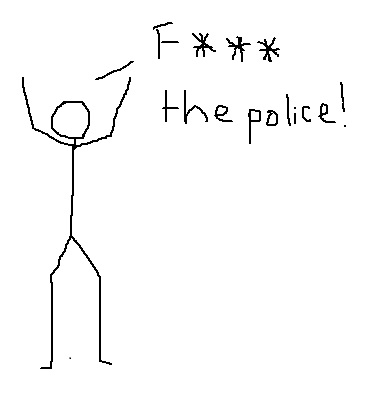 So, spurned by my new-found rebelliousness and disregard for people’s opinions, I decided I would make some more confessional controversial statements. It’s rather liberating, you see. Rid myself of my deepest, darkest secrets and put them out there for people to do with what they will. Because I just don’t care. I am a law unto myself. FREEDOM!!

1. I quite often find children intolerable.

Thought I’d start with a nice evil one, but also one which I know will have a lot of you biting your lip and nodding in a ‘Thank God someone else does too’ kind of way.

Kids are cute, I’ll give them that. Not all kids, mind. There are some repulsive children out there, the sort where it is literally impossible to smile benignly and say to the mother ‘Awwww, she is adorable, you must be so excruciatingly proud to have spawned such a beautiful creature.’ 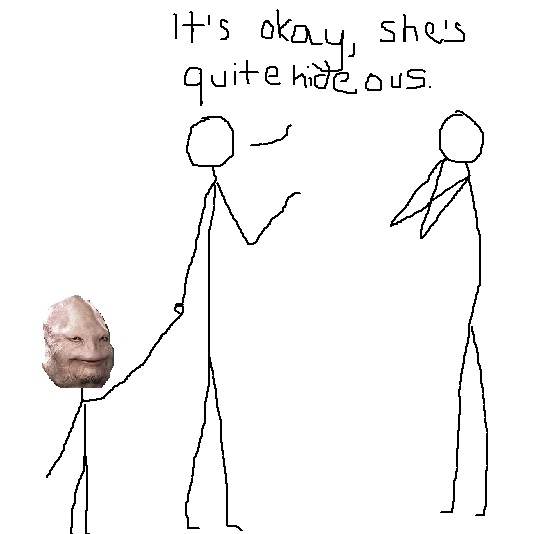 But I can handle ugly children. I’ll just look at them and wince a bit, and there’s no harm done. It’s children’s behaviour I can’t handle. Now, I know that by their very undeveloped and uneducated and un-everything nature, children can be expected to act in ways that are perhaps socially and humanely undesirable, such as throwing tantrums when they don’t get their own way, or crying when they’re tired or hungry, or winging and being unreasonable and refusing every offer of food, sleep, warmth, entertainment and affection, but I just can’t help wanting to kneel in front of them and say very quietly: 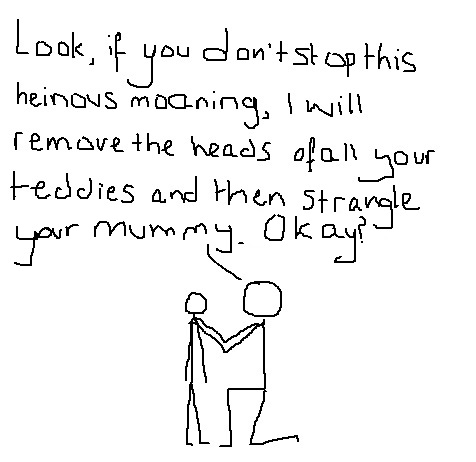 And as for letting them win at stuff – well. Perhaps fortunately, I am yet to have my own children, because those children, when / if they eventually turn up, will have to learn the hard way that, guess what: LIFE IS NOT A BOWL OF RUDDY CHERRIES. So you’re not very good at hitting a shuttlecock with a badminton racket, and you’re desperate to beat your mum or at least get the bloody thing over the net, and your mum might shout words of encouragement and advice from the other end of the garden, but you know what she won’t do? 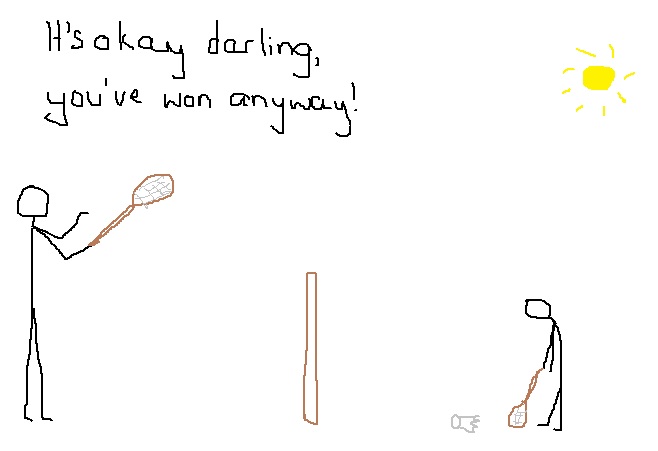 Hell no. Because you haven’t won, have you? You can’t even get the bloody thing over the net. And years later, when you sit down in an interview room for the job of your dreams and the interviewer doesn’t say ‘You sat down in that chair very nicely, you’ve got the job,’ you won’t be disappointed. Then you’ll thank me.

2. If I were Queen, I would ban football, tennis and golf from ever being shown on television.

It’s a Wednesday evening. You’ve had a hard day at work. Your boss doesn’t respect you and someone used up all your milk. You want a nice quiet drink down the pub to relax. You get to the pub and are confronted with this: 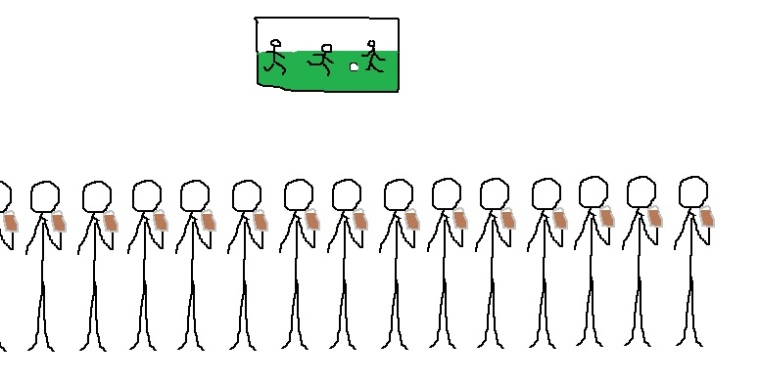 Or you get home from work one day in late June to find that your house has burnt down, destroying every possession you ever owned, with no hope of salvaging anything whatsoever, and you call a friend for some support. 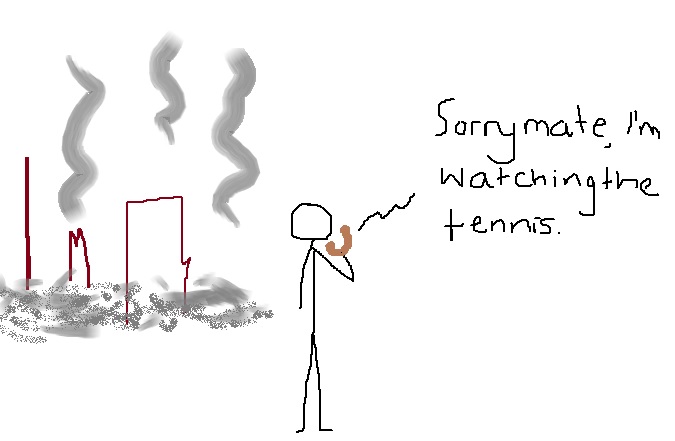 Or you’ve just run someone over and you’re quite keen to get it off your chest, so you go down the pub and sit next to your mate and have the following conversation:

You: Why are you shhing me?

You: Look, me talking in a pub in England is not going to disturb Tiger Woods playing golf in Florida –

You: Mate, I really need some support here – 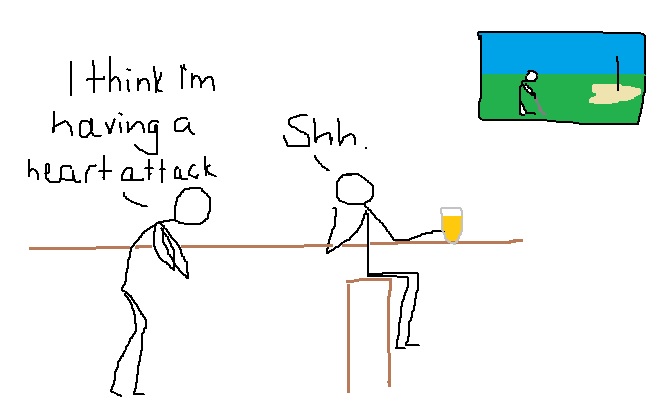 Enough said. Of all sports, it’s those three that ruin the most lives. 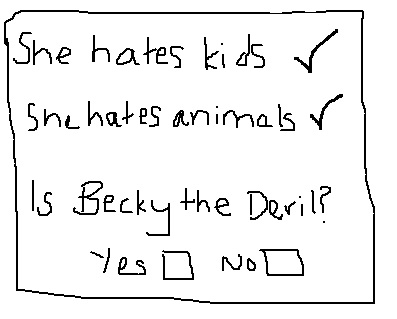 Now let’s get one thing straight. With the exception of cats, I do not want to perform animal genocide and rid the world of every living animal on earth. I’m fine with coexisting in a world with animals. I really like dogs. I quite like sheep, and I’ve definitely got quite a lot of time for most ducks, especially mallards. But a photo of a horse leaning down to nuzzle its foal and the words Motherhood is Beautiful written across it will take me dangerously close to animal genocide.

And I resent the fact that, just because I can’t get excited about your 3,503 blurred photographs of the back-end of an elephant from your African safari, it does not mean I deserve this: 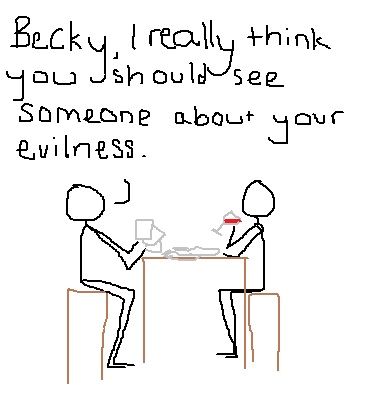 And yes, that is the blood of a newborn kitten I am drinking.

4. I have never seen Back to the Future, The Godfather, Rocky, The Karate Kid, Labrynthe, The Breakfast Club, Star Wars, or Top Gun, and I thought Ghostbusters was rubbish.

When I was a child, having to admit that I had never seen any of the above films was something I dreaded. It was social suicide. Mockery, shunnage, and active disdain would ensue. My pleas of ‘But I have seen Gone with the Wind, Singin’ in the Rain, The Man Who Would Be King, and I thought the BBC adaptation of I, Claudius was simply marvellous’ fell on deaf ears.

But as I got older, identifying a social situation in which I could drop this bombshell gave me more and more pleasure: 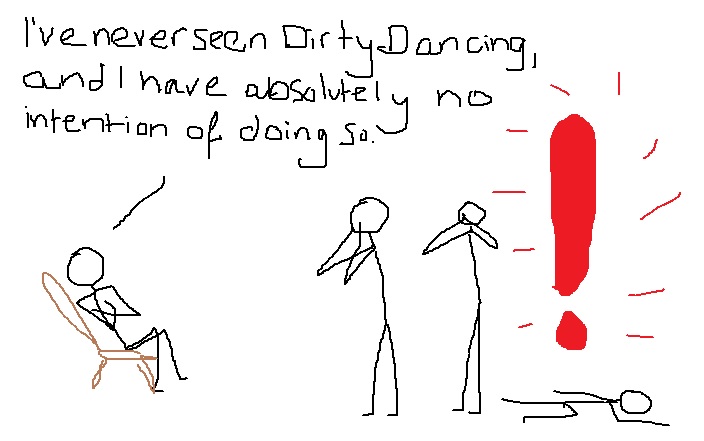 You know what, I’ve got through 28 years without ever having seen those films, and I’ve done okay. And what’s more, I’m shocked and appalled when you tell me you’ve never seen Strictly Ballroom, Robin Hood: Prince of Thieves, Calamity Jane, Mary Poppins, The Railway Children or Monty Python and the Holy Grail. And the more shocked you act when I tell you what films I haven’t seen, and the more you tell me I absolutely have to watch them or else I will be a social outcast for all eternity, the less likely I am to ever watch them.

That’s just how it works.

5. I would rather have a holiday in Las Vegas than help build a school in Africa. 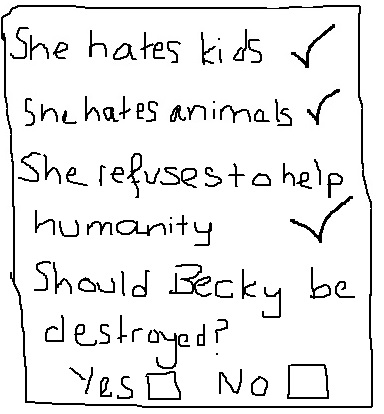 I’m a nice person, honest. Just like you’re a nice person. We’re all nice people, really. But if someone said to you ‘I’ll pay for you to go to Las Vegas, stay in the most expensive suite on the Strip, give you £5,000 to spend, and book you in at the best breakfast buffet in the city, or … you can go to a small African village and help build a school that the community so desperately needs’, think very long and hard about your answer.

Believe me, if I had Bill Gates’ dosh, I’d get a whole heap of schools built over there – I mean, they wouldn’t be able to move for schools and wells and hospitals and housing. 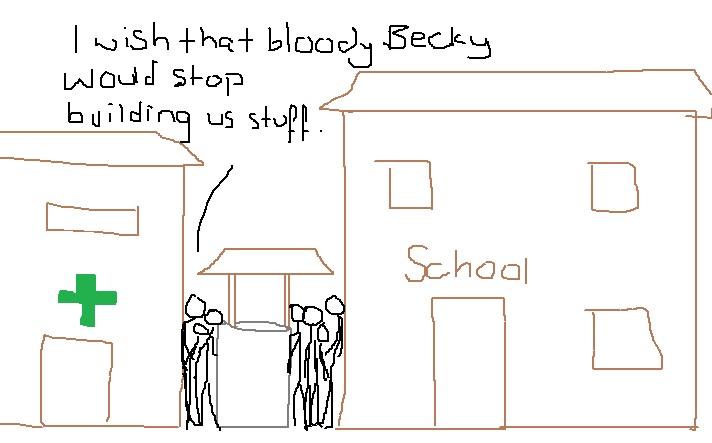 I’d just also spend a hell of a lot of time squandering heaps of cash and indulging in sordid debauchery in Las Vegas, that’s all.

I feel much better after confessing all that. All that remains for me to do is sit back and await the hate mail…*