Most treasured Listener, I have been reduced to a violent, ire-spewing volcano of fury. I have been filled with such mania that I fear for those around me. I have been consumed by a raving anger that I cannot be sure hasn’t ruptured my spleen.

What has caused this surge of rage inside me, you may ask. 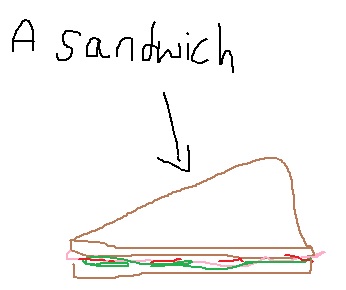 Allow me to explain.

I bought a shop-made sandwich. I bought it because my greedy eyes liked the look of the bulge of sumptuous egg filling that ballooned from the bread and smattered against the plastic wrapping. I went all Samuel L. Jackson on myself, and muttered ‘That looks like a taaaasty sandwich’.

I skipped home, joyful at the prospect of mouthful after mouthful of lavish eggy delight. 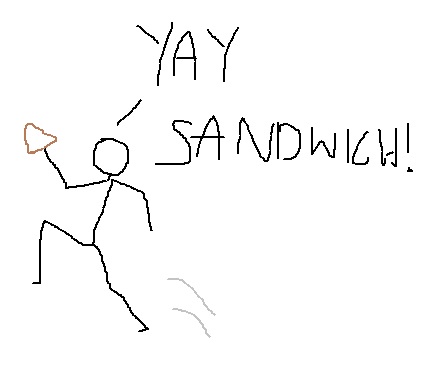 The first couple of bites were as I had hoped: bloated with generous, chunky egg. The third and fourth mouthfuls were strangely disappointing. There was a distinct lack of filling. The fifth and sixth mouthfuls were annoying. The seventh and eighth were a downright insult. The ninth was an outrage. Twas nothing but bread.

You see, Listener, sandwich manufacturers are deceitful toads. They will construct a triangular sandwich so that it appears to be consistently spread with a generous, nay, munificent amount of filling. It is only when the innocent, trusting customer has purchased and nibbled the initial hypotenuse of the triangular sandwich, that they discover there is no more filling.

I shall demonstrate using this helpful diagram: 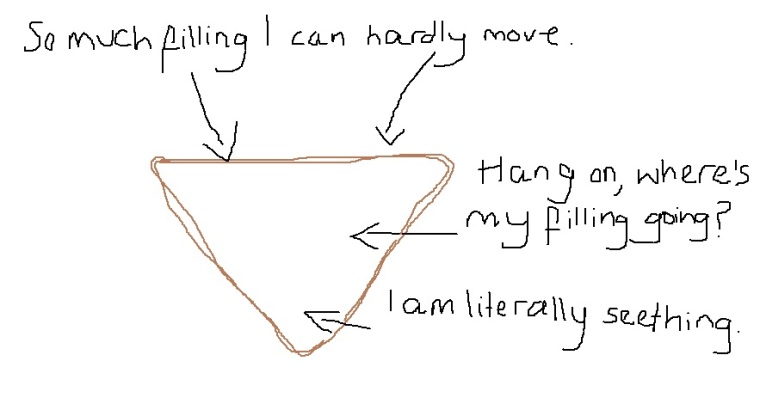 This seemingly trivial incident made me shockingly and bafflingly angry. I ranted about it for a full 20 minutes. I was livid. Why? It was only a sandwich. It obviously touched a weak spot in me, that spot that makes my normally calm demeanour bubble over into a venomous frenzy.

I can only deduce that I experienced the phenomenon that occurs occasionally in life that I shall call ‘Moments of Inexplicable and Disproportionate Rage at Minor Incidents’. Those inconsequential things that send a normally laid-back human being into a torrent of wrath. Everyone has stimuli that send them into unadulterated, uncontrolled, unjustifiable rage, and, if you will allow me, dearest Listener, I shall exhibit the most potent of mine. 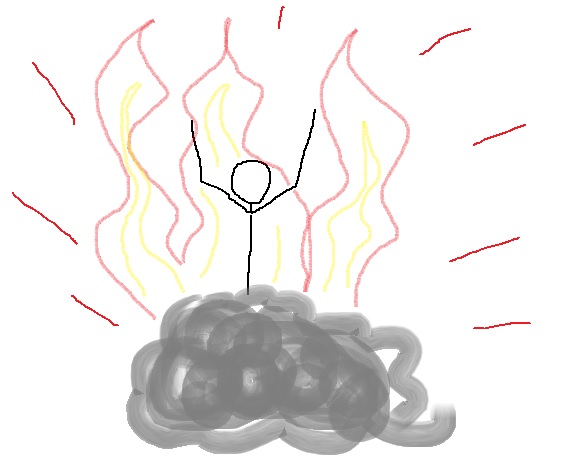 I can already feel my blood pressure rising.

People who feel the need to vocalise every single word they see around them makes me inexplicably livid. I had a boyfriend many years ago whose lovely mother cultivated this rage in me. On car journeys she would sit in the front passenger seat gazing serenely out of the window. What’s wrong with that? Nothing. But what would you do if someone in your car, from which you cannot escape, reads out loud every single road sign and every single billboard and every single shop name you pass? 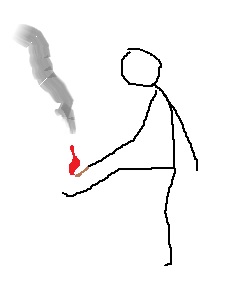 Exactly. You would set fire to your own foot.

Just imagine it. An entire journey filled with a relentless oral commentary of geographical wordage. With every turn into a new road she would say dreamily ‘Albert Crescent… Rose Drive… Edridge Road… Samson Street…’ And just when I thought we were safe on long roads with no turnings, there would be ‘McDonalds… Marks and Spencers… Vision Express… Starbucks…’

And with every harmless vocalisation from the front seat, I would sit in the back seething quietly to myself and wishing this lovely, blameless woman would have a sudden heart attack. 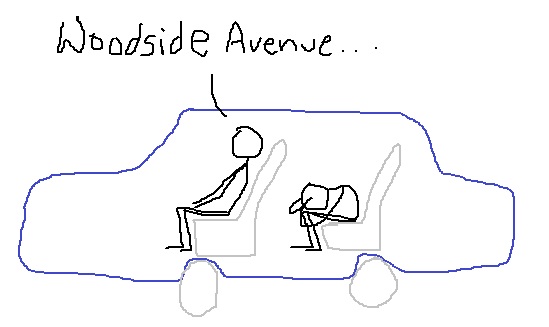 Oh, cherished female listeners, how many times have you seen a dress or a top on a shop window model and thought ‘Oh my goodness me, that is a gorgeous dress. I would love nothing more than to add that charming garment to my wardrobe,’ and you have taken it to the fitting rooms to discover that this dress has been made by people with a streak of such sickness inside them, such malice, that you wonder at the very continuation of humanity. For this dress is literally impossible to get into. 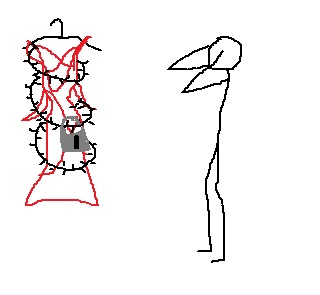 It is made of gratuitous straps and erroneous gaps and with such heinous anatomical disregard, that you cannot help but exclaim ‘THE VERY EXISTENCE OF THIS DRESS IS FUTILE AND OFFENSIVE, FOR NO HUMAN BEING WILL EVER SUCCEED IN WEARING IT, AND WHY THE FLYING F*** WAS IT EVER INVENTED IN THE FIRST PLACE???’

This makes me want to line up a row of baby meerkats and machine-gun them. 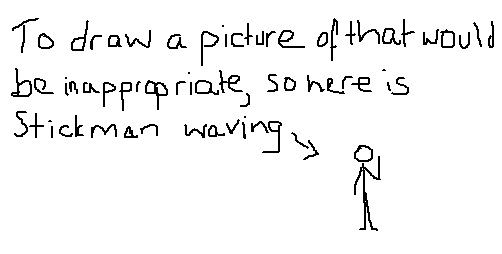 People Who Dawdle at Ticket Barriers

We all know that terrifying moment of panic upon approaching a station ticket barrier, when we are fumbling for our tickets, and that terrible fear sears through our mind: What if I don’t find my ticket before I reach the barrier???

We all know that feeling. But we step to one side where our physical presence will not be an obstacle to others, and we rummage in our bags and pockets, cursing wildly under our breath, until we find our ticket and rejoin the stream of people through the barriers. All is well.

Except not everyone does that, do they? No. Some people choose to search for their missing ticket in the entrance to the ticket barrier thereby preventing any other poor sod from passing through.

This makes me want to discharge my own kidneys. 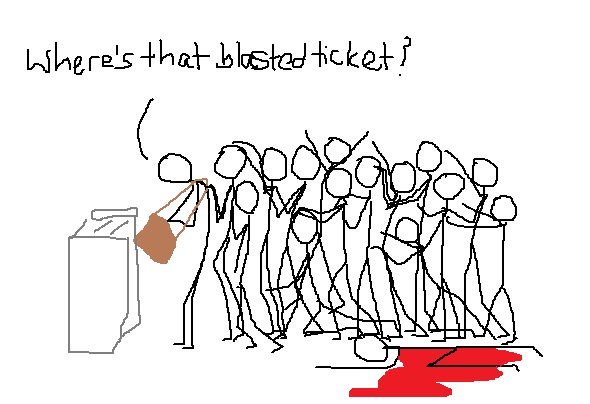 I tell you what, Person Searching for Your Ticket at the Ticket Barrier, why don’t you just sit down and have a rest while your there? Maybe get a book out and have a read for half an hour? Got a vase that needs mending? No problem, I’ll fetch you some superglue and you can do it right there.

Being told a story by a friend is a lovely thing. Whether it’s humorous, sad, or nail-bitingly exciting, it should be a joy. However, so many verbal tales are ruined by narrative detours of such abominable irrelevancy that they make me want to run head-first into exposed brickwork. 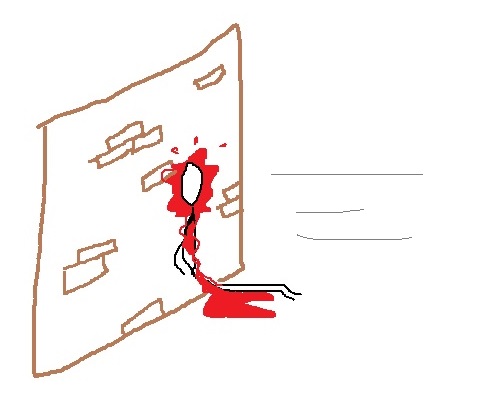 Chum: Did I tell you the story about when I found a dead body in my airing cupboard?

Me: No? Gosh, that sounds exciting. Pray tell.

Chum: Well I’d just got home from work one Wednesday – or had I been to yoga? It could’ve been ballet conditioning, come to think of it… perhaps it was a Thursday, in which case it would’ve been cookery class. Anyway, I got home and – no, it was definitely Tuesday because I had my swimming kit with me and my hair was wet – unless it had been raining… We’d had a lot of rain, I know that much, because I remember saying to Gary how the marigolds were going to suffer… 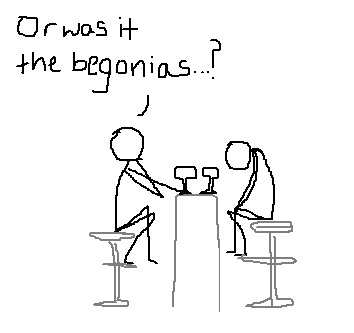 Chum: Anyway, I got in and made myself a tuna sandwich – or was it salmon? No, definitely tuna, because we hadn’t had any salmon in the house for ages because Sainsbury’s had been out of them for at least two weeks – could’ve been a month, come to think of it, I know they were very short for a good long while… So I ate my sandwich, had a glass of squash and an apple, maybe even a banana, although I don’t tend to have bananas in the evening because they give me gas, and I took some washing out of the washing machine… or was it the tumble dryer? I think I put another load in, you know, of jeans, shirts, socks… 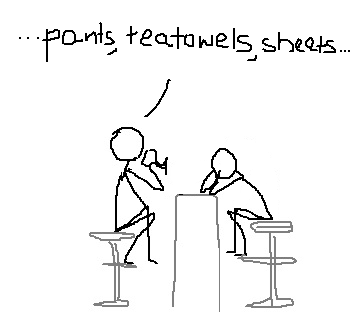 Chum: … and I took some ironing upstairs – we’d just had Ian and Bev over to stay, so I’d had some extra linen to iron, and the steam iron had packed in so we’d had to go to B&Q to get a new one – sixty quid, can you believe it? Gary was furious. Yeah, so I’d gone upstairs with this pile of ironing, which had taken me all Saturday morning to do … or did I do it on Sunday? It could’ve been Sunday because I think we’d gone to Gary’s mother’s on Saturday and she’d made this awful marmalade tea loaf – or was it a lemon drizzle? 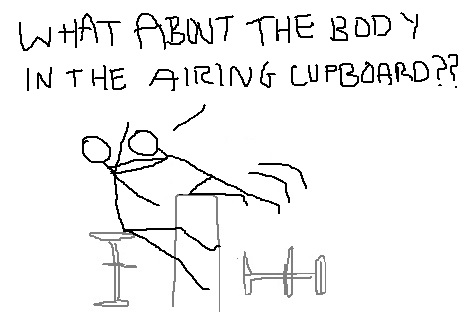 Listener, I do not have it in me to endure such flagrant contempt for narrative pertinence.

And recounting all those things has sent me into such a bluster I shall be forced to smash myself in the face with the picture frame I bought from Debenhams. Or was it Bentalls? It could have been John Lewis. Actually, I’m pretty sure it was Ebay… 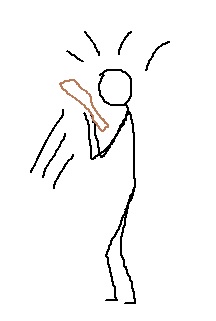