So, Listener. You’ve popped along to my blog expecting to hear me say things. Is that right? Well do you know what? Why don’t you just get the hell out of my face and never darken my door again. I just cannot be bothered to say anything, and what’s more, you mean nothing to me. NOTHING I TELL YOU. In fact, I would go so far as to say I DESPISE YOU AND EVERYTHING THAT YOU STAND FOR. Now GET OUT.

That, Listener, was an example of extremely poor customer service. It wasn’t very nice, was it? No. Do I feel bad for saying those terrible things? Of course I do. I hate myself. I shall go without peanut butter for a month to punish myself. Please accept these flowers by way of apology.

But, as we all know, modern life can vomit up the most abominable examples of poor customer service, and I have a magnificent example for you. Observe.

You may have noticed that I have not said a lot of things recently (if you hadn’t noticed, that’s fine. We’ll overlook it just this once. Next time there will be hellish consequences). This is because my phoneline died a very sudden and inconvenient death, and thus my Internet connection vanished.

I was peeved, Listener. However, I was confident that together, O2 and BT, the multi-multi-multi million pound companies that provide my phone line and Internet connection, would sort it out in no time.

I spoke to a 2nd person. I offered my home phone number. ‘Oh, we don’t need that, don’t worry.’ I was a little nettled, Listener, I don’t mind admitting – but it was no big deal.

The 2nd person went on to tell me to unscrew the front of my phone socket.

‘Yes. I need you to see who provides your phoneline.’

‘I still need you unscrew the front of the phone socket.’

I hung up. I found a screwdriver. I unscrewed the front of my phone socket.

By this time, I was muttering rather irately to myself. 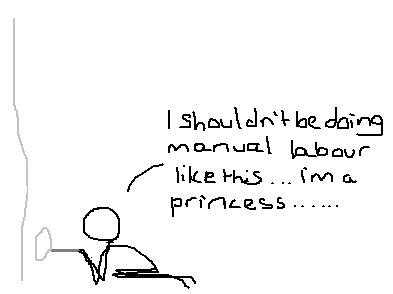 I spoke to a 3rd person. I offered them my home phone number. ‘Oh, we don’t need that, don’t worry.’ I told them I had unscrewed the front of my phone socket. ‘Oh, really? What does it say underneath?’ I told them it said BT. ‘In that case, BT provides your phoneline.’

‘Can you attach a phone to the socket?’

‘There is a phone attached to the socket.’

‘And there’s no dial tone?’

‘Your line seems to be dead.’ 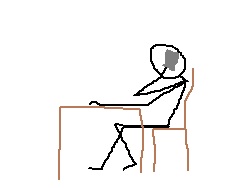 ‘Looks like you have a fault, then. We’ll get on to BT. It should be fixed within three working days. Would you rather they contact you on your home phone or mobile phone?’

‘…My home phone is dead. We have ascertained this. Again, that is the point of my call.’

‘Right, yes. Your mobile then?’

So I got on with my life. My Internetless life. Every day I received a text from O2 assuring me they were diligently working on my home phone fault. My confidence in an army of people frantically working on my home phone fault at the telephone exchange remained steadfast. I imagined it to be like in Willy Wonka and the Chocolate Factory when Mr Salt has a factory full of hundreds of workers furiously searching for a golden ticket in thousands of chocolate bars. 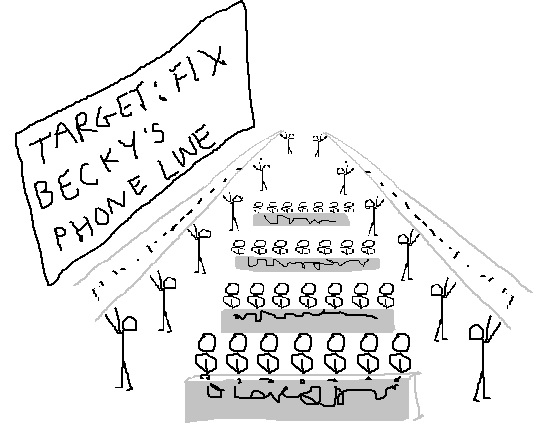 It got to day four. My phoneline was still dead.

I spoke to a 4th person.

‘You have a fault with your BT phoneline.’

‘There are no notes on the system. I’m sure they’re working on it at the exchange. Give it another 24 hours and if you don’t hear from us, ring us back.’

I gave it another 24 hours. I didn’t hear from them.

I spoke to a 5th person.

‘You have a fault with your BT phoneline.’

‘A BT engineer needs to come to the property to fix the fault. The next appointment in your area is 3,405,064 light years from now and they will turn up between the hours of 9am on a Wednesday and 11pm the following Monday.’

So the Thursday six days later, after six days of receiving texts reminding me of the impending appointment and the fact that I would be charged £50 if I wasn’t at home when the BT engineer turned up between the hours of 8am and 1pm, I booked the hours of 8am to 1pm off work and waited to be connected to the world again.

I waited. I was alert and sniffing the air, like a coked-up meerkat. I couldn’t concentrate, Listener. Every sound, every car engine, every footstep from outside made me bolt to the window like an excitable terrier.

By 12.45pm I was becoming sweaty, violent, and desperate.

‘Right, I’m looking at your notes and the engineer’s at the exchange now, fixing your problem from there. He’ll give you a call in half an hour.’

He promised me a goodwill gesture, money off my next bill, a dinner and dance, the stars, the moon, a holiday in Vegas, and Llama.

I hung up. I waited a further two hours. No one came to fix my phone line.

By this time, I was nearing a point that could be considered dangerous. 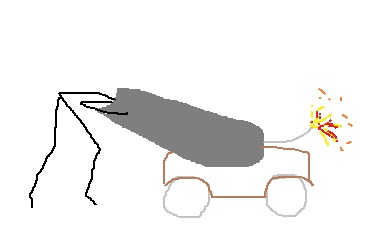 I spoke to a 7th person. I told her what the 6th person had said. She went to find him to confirm. I was put on hold. I pulled my thumb off with some pliers.

The 7th person came back and said ‘Yeah, my colleague didn’t say categorically that the BT engineer was fixing your fault from the exchange and would call you within half an hour – my colleague was just conjecturing.’

I injected some heroin into my eyeball.

‘Well there are no notes here. I’m sorry if you misinterpreted what my colleague said. I can’t tell you why the BT engineer didn’t turn up, I don’t know where he is and there’s no way of contacting him. You’ll receive a call from us tomorrow to sort it out.’

I was so inhumanely furious I ate an entire sharing bag of Malteasers and had a bath.

The next day, the Friday, I received a call from O2. I spoke to an 8th person. She rebooked the BT engineer appointment for the following Monday. I was assured he would definitely turn up.

The following day, I received a call from O2. I spoke to a 9th person. I was informed that when the 8th person had booked my appointment the day before, there had been a fault in their system, and there was in fact no appointment booked for Monday, and the earliest appointment was Thursday.

I shut my head in the oven door.

For the next couple of days I received texts from O2 telling me not to forget that a BT engineer was coming to my property on Thursday to fix my home phone fault, and I checked into an asylum.

‘Hi, I’m a BT engineer, I’m outside your property and I need access to fix your home phone fault.’

I took a sedative, pictured turquoise waves rippling over my toes, and asked my colleague to remove all sharp objects from within an arm’s reach.

‘What are you doing outside my property? I was not expecting you until Thursday. I expected you last Thursday, then I was expecting you this Thursday, and now it’s the Tuesday in between and you are at my property and I am not there because you are not supposed to be there.‘

‘Oh, right. Well, yeah, this fault’s been sitting on our fault list for a while, so we thought we’d get on and do it.’

‘That’s extraordinarily nice of you.’ You know, to do your job.

‘You can wait until Thursday when we can come back, or…’

‘NO. No. Stay exactly where you are.’

Fortunately, fathers always manage to save the day. My father was at hand. He let them in. The fault was sorted in ten minutes. I ate two doughnuts and begged my boss to be allowed to go for a gin. He said no. So I lay under my desk for a few hours and tenderly cuddled a stapler.

Well, actually, yes. It ruddy well is. This is customer service at its most abysmal. Imagine if every business operated with this level of disorganisation, miscommunication and whimsy, and treated their customers like funny little toys they can muck around with. 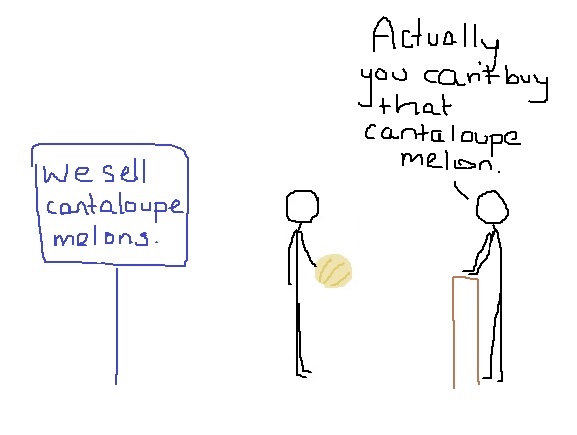 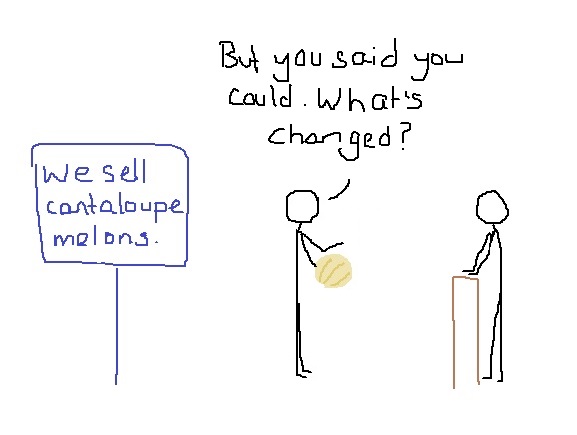 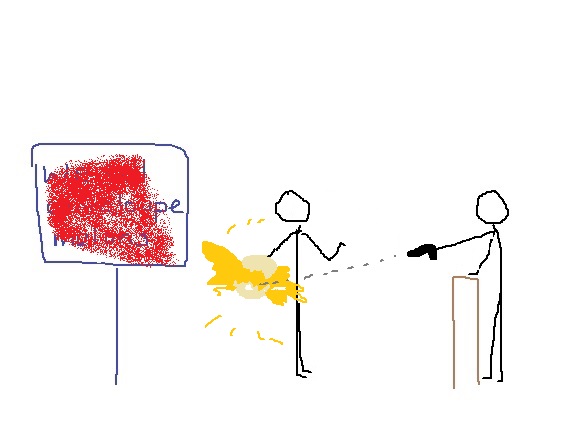 Sadly, more often than not we have no choice but to just suck it up and get on with it.

I am yet to contact O2 to ask what they will give me to compensate for this ludicrous situation. I don’t quite feel emotionally ready for that.

I am still getting texts from O2 reminding me that a BT engineer is coming to fix my home phone fault on Thursday.