It is well known that the continuation of human existence relies heavily upon feelings of amorousness that arise from a man and a woman being stuck indoors together. I believe the formula goes something like: 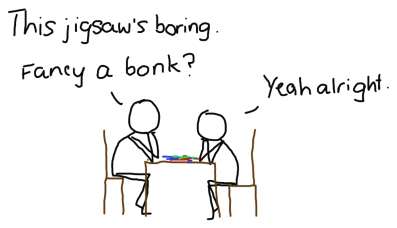 But Biology has not taken into account the greatest threat to the continuation of human life since the time Tesco ran out of Lambrini: NETFLIX.

Picture this: a Wednesday night. It’s cold and windy outside. A couple is snuggled on the sofa in front of a roaring fire. A bottle of red, mostly drunk, adorns a nearby table. The air is brimming with lusty potential, with the tingling prospect of physical pleasures, until…

In that moment, the potential for a new life to enter the world 9 months hence from that night, vanishes.

And this happens again and again, across the globe, the relentless interruption of humanity’s continuation, for months, years, decades, until, eventually…

The rigid hold Netflix has over us! Its addictive, alluring grip closes ever tighter, forcing us to stare indefinitely at its proferrings, to wade eternally through its vast forests of visual fruits, until things like food, sex and bodily functions play second, third and fourth fiddle to finishing a season of Black Mirror. 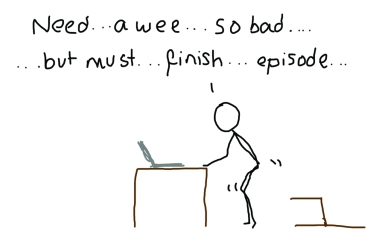 And what of those few new lives that manage to squeeze into being, those that were spawned whilst their impatient parents were waiting for their episode to load? What will Netflix’s effect be on them?

And what of productivity? How can someone* sit at their desk and write their novel when suddenly faced with a pop-up that offers a list of the Best 1,742 Series to Watch on Netflix Right Now?

* I definitely don’t mean me.

Face it: Netflix is a drug, a temptation that lures us into distraction and endless hours of square-eyed-ness. Imagine what would have happened if the Serpent had offered Eve a laptop instead of an apple? 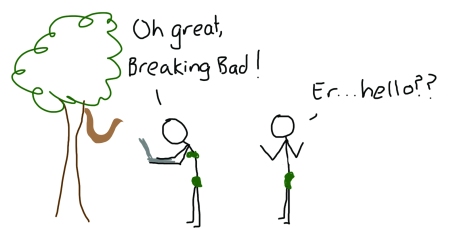 Of course, I am well aware that there still exist people in this world that have yet to become depedant on this drug, or who have even found the fortitude to resist it. Netflix does not hamper their sex life or productivity; does not force them to urinate in a bucket in front of their TV to avoid pausing an episode of House of Cards. 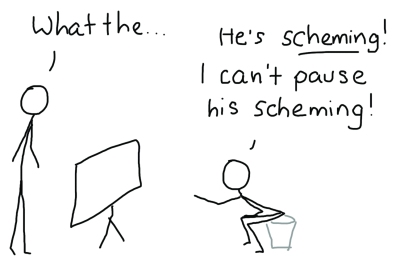 And the terrible, devilish paradox?

They don’t know what they’re missing.

Isn’t Netflix WONDERFUL?? Hey, it’s a Monday evening, and I’ve got an urge to watch something about a murdered nun, and I want it to link inexorably to the dark underbelly of the Catholic Church… oh HI, The Keepers! Or I have a couple of hours to spare, and I really wish I hadn’t given away my DVD of Robin Hood: Prince of Thieves…. well HEY THERE, Netflix, thanks for saving the day! But what if I’m disillusioned with society and want to spend the next two weeks in solitary confinement and only leave the house to stock up on wine, crisps and bananas… Hello, Mad Men! Take me away to your glossy corridors and do not let me, even for a moment, think of the many things I need to do in my actual life.

The variety, Listener. The choice. Like a gargantuan banquet on which you gorge until you are sick, and just when you think you’ve feasted enough on rich, delicious victuals, they bring out… the cheese board.

Do not underestimate the educational potential of Netflix. It has taught me many things: how to make crystal meth, how not to behave in prison, how to commit a murder and get away with it. And, perhaps most importantly, it’s taught me that in a different life, I would have very much liked to be a heavy rescue operator towing trucks out of snow on a remote Canadian highway (thank you, Highway Thru Hell. You are officially my guiltiest of guilty pleasures).

So what is the answer to preserving the human race? How do we resist the charms of this vile seductress? How do we defy the evil SSSSHHHHHH I’M REWATCHING MAKING A MURDERER HOW DARE YOU INTERRUPT ME GET OUT OF HERE YOUR HEINOUS SWINES