Before I say anything new, most beautiful listeners, I want to say a heartfelt thank you for your wonderful comments following my post on the rubbishness of eating disorders. I have been overwhelmed, delighted, moved to tears, and inspired by the things you’ve said, and Stickman will now demonstrate my thanks through the medium of an interpretive dance.

Rather avant garde, Stickman, but I’m sure they got the message.

I have decided, most darling Listener, to get off my arse. Figuratively, metaphorically, emotionally, mentally, creatively. Particularly the last one.

You see, I have been languishing on my arse for many, many years.

I want to be a writer.

I have wanted to be a writer since my mum stapled printer paper together, drew ruler lines on it, and encouraged me to write stories. My first book, written at the age of six, was the hit bestseller The Girl Who Would Not Go To Bed. This thrilling tale of a child’s rebellion against the rules enforced on her by society, received glowing reviews from my parents, and several of my teddy bears.

I haven’t been totally pathetic in my endeavours to become a published writer. I am a published writer: I have a very tiny book of short stories published. I have two degrees in creative writing. I have a hard drive which is almost obese with stories, scripts, random splurges of writing and strange thoughts. But the thing that slouches like an overweight, slightly perspiring figure, waiting for someone to haul it out of its armchair and make it do some much-needed exercise, is my novel.

I came up with the idea for this novel seven years ago. I have been sporadically writing it for three, and it is progressing slower than an arthritic snail carrying heavy shopping. Why? Because I am a serial procrastinator, a daydreamer, a believer that my book will appear on bookshelves by merely thinking about it. And if all my thoughts became reality, heaven knows what else might occur.

If you ever write anything, you will understand. Whether you take it seriously or not, whether you do it for a living or just want to paddle in the creative pond for shits and giggles (an excellent metaphor, and one for which I can almost definitely thank my two degrees), you will know that writing is superb. It’s fun, it’s rewarding, it’s absorbing, it’s almost magical: fully-formed human characters can somehow crawl out of your head onto the page and do stuff you didn’t even think you knew about; worlds can appear, events can occur that make you laugh, cry, or phone a psychologist. 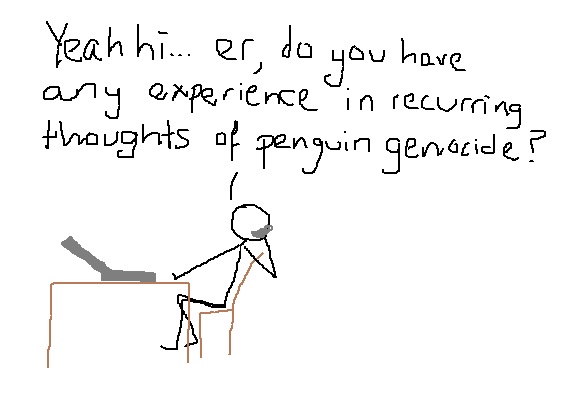 But if you know any of the above, you will also know that writing is a royal pain in the arse.

I mean, it really is a nightmare. Of all the hobbies and professions known to Mankind, nothing has generated a more dedicated breed of procrastinators, time-wasters and excuse-makers than writing. Writers will do anything to get out of the one thing they should be doing. 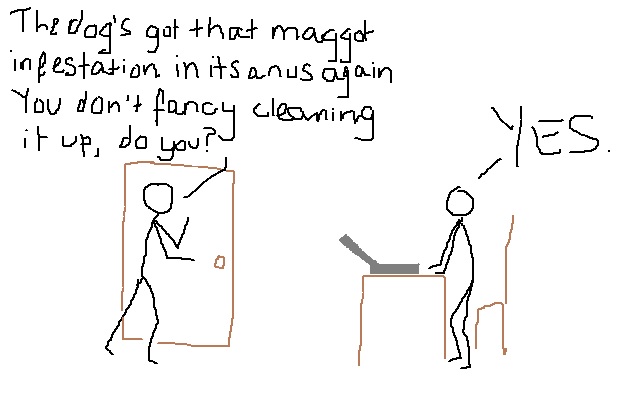 Why is this? Is it because they’re scared of hard work? Is it because they are terrified of the blank page? Is it because a writer can plough away for hours, days, weeks, on a piece of writing, to emerge sweaty, exhausted, potentially bloodied, and realise with the crushing certainty akin to imminent death by falling anvil that every single word is a seeping, pus-filled, hopeless, repugnant pile of shit?

For me, the answer to all of the above is YES, YES, AND THRICE YES.

All those things are genuine, tragic fears. That terrible, niggling worry that you are wasting your time, that you would be more productive trying to breed a haddock with a gorilla.

And it is those fears that have kept me rooted firmly on my arse for so many years. I have made a total of about £100 from my writing in my whole 28 and a half years (that half-year really sticks the knife in, doesn’t it?). Now that might be £100 more than some other people, but the point is I want to make a living from writing. I want to get on a train and see someone absorbed in my book. I want to hear people discussing it in cafes. I want bookshop employees to roll their eyes and moan ‘I’m so f***ing bored with this book’ when they open yet another box of my bestselling novel to stack onto the shelves.

And none of that is ever going to happen if I continue to sit here and just think about it. If I continue to wander around listening to tracks on my iPod thinking ‘Wow, that would be an excellent track to play over the trailer of my bestselling novel-turned-blockbuster-movie’, if I continue to spend all my time daydreaming about glowing reviews in The Times and seeing my name on shortlists for coveted accolades, if I continue to basically do nothing, then my eventual result can best be illustrated by asking my friend, Mr Jack Shit, to simply stand here and look at you.

Not a lot happened there, did it?

I will now ask my friend Stickman (who will quickly and imperceptibly change out of his Mr Jack Shit costume and back into his regular clothes) to illustrate what I should be doing: 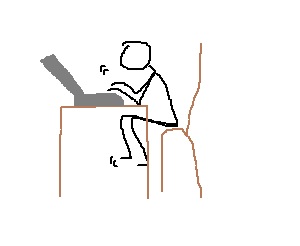 A veritable flurry of activity. Thank you Stickman.

So I’m going to do it. I’m going to get off my arse and write my bloody novel and become the writer I bloody well should be.

And you know what? You dudes have a lot to do with this sudden burst of let’s-get-the-heck-on-with-my-writing-life. You tell me I am good at writing, that I should keep doing it. Well, I’ve listened. And I’m unfathomably glad that I have, and I’m unfathomably grateful to you all for your encouragement and your lovely words. You faceless people around the globe, who could be serial killers or politicians for all I know, have helped me get off my arse. And for that I am eternally grateful. 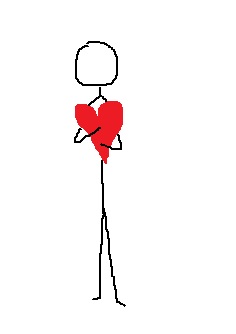 So, writers of the world, WRITE!! If you have no problem with procrastinating, and are one of those terribly inspiring writers who rise at 5am, write for 4 hours, and then go to your day job a healthy, happy and productive writer – WELL DONE! Keep it up! If you are one of those procrastinators who would rather dissect the bowel of your own grandmother than sit down and open Microsoft Word – here is a little flash of inspiration that sparked inside my brain a few months ago (probably while I was dissecting my grandmother’s bowel), and which I now have cellotaped to my bedroom wall:

78 thoughts on “Becky says things about … being a writer, dammit”