Our Airbnb in New Orleans was a two-bedroom apartment in a Victorian doll’s house, in a quiet leafy street ten minutes from the madness of the French Quarter.

It had an enormous balcony. It is important that you understand some crucial facts about this balcony, the significance of which will become clear later on:

We managed to resist the urge to buy eight cases of wine and spend the rest of our lives drinking them on the balcony, and delved into the tangled criss-cross of streets in the French Quarter.

It was like any picture you’ve ever seen of New Orleans: the wooden Victorian houses were slapped in every colour of the rainbow; hanging baskets dripped from balconies that were held up by spindly, cast iron supports; strains of jazz wafted on the hot, humid air.

But it was when we came across a jazz band in the middle of a street who were playing a jazzed-up version of The Flintstones, watched serenely by a dude in a red tailcoat and a top hat relaxing on a kerb, that I really felt we had arrived in New Orleans. 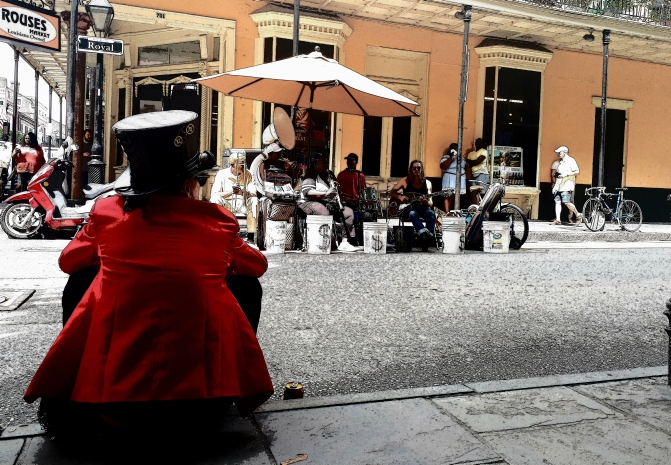 We then came to the joyful realisation that, as we were no longer in Tennessee, we didn’t have to eat BBQ ribs anymore. Prior to this trip I didn’t think it was possible to not want to eat BBQ ribs every day, but it turns out it is eminently possible, and even vital to your physical and psychological health. Happily, New Orleans offered something else on which we could endlessly binge: shrimp.

So we went to Johnny’s Po Boys and shared one of these bad boys. 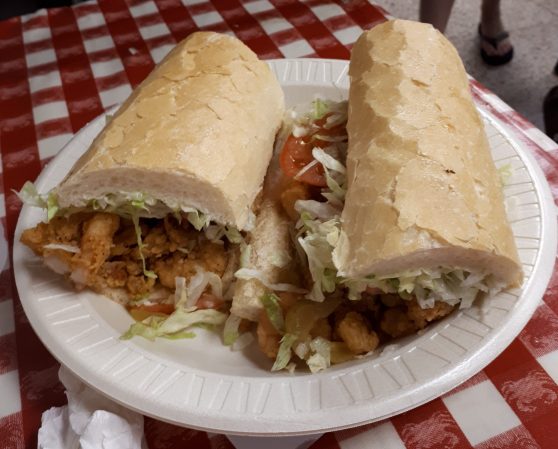 Shortly after this we found ourselves at the mad end of Bourbon Street.

Bourbon Street is the street that comes up in Google Images if you search for ‘New Orleans’. It runs right across the middle of the French Quarter. At one end – the end nearest our apartment – it is quiet, lined mainly with residential doll’s houses; there’s a cluster of gay bars as you get to the centre, then jazz bars, and gradually the jazz bars outweigh the apartments, then as you get nearer to the skyscrapers of the city centre, the jazz bars become full-on clubs with names like ‘Jubbly’s’ and ‘Smokin Tits House of Fun’ and ‘Sloppy Cocks’, and then suddenly you’ve unwittingly joined a bachelorette party and you have downed 37 shots of unidentified alcohol for $10 and you’re lying face-down on the putrid floor of a pulsing club and a bare-chested man is simultaneously dry humping you and trying to get you to come to the club next door where they have live bear-baiting and everyone is naked. 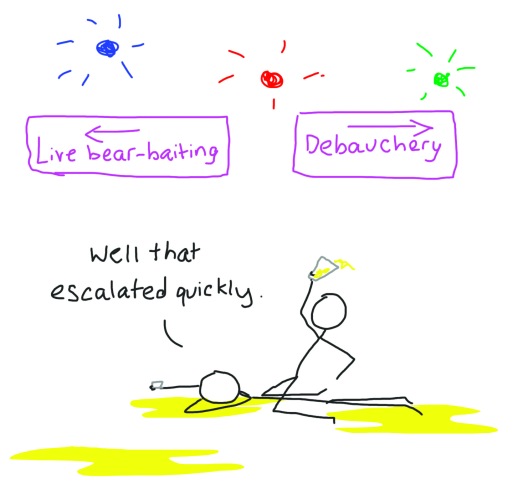 So I exaggerate. But it’s not far off that. The mad end of Bourbon Street was a cross between Blackpool, Brighton and Croydon on a Saturday night, with lashings of Las Vegas spewed over it for good measure.

We decided we would avoid it at all costs and stick to the jazz and wine bars. This decision doesn’t make us old, just civilised.

Due to road trip fatigue, we decided to make fajitas in the apartment and get an early night. So by 11pm we were both in bed, looking forward to a long, refreshing sleep.

This long, refreshing sleep was, however, not to be.

I was awoken at 2am by what I first thought was thunder.

I realised with horror that it was the sound of someone trying to get into the front door of our apartment.

Not half a second later, I realised, with considerably more horror, that it was actually the sound of someone trying to get into our apartment through the French doors of Sarah’s bedroom – which, if you recall, led directly onto the balcony.

I briefly wondered if I was dreaming and had made up the whole mad banging thing.

Here are my French doors, at a more peaceful, less terrifying point in our stay:

The only way I can describe to you the urgency and violence with which my French doors were being shaken is that it sounded like Godzilla desperately trying to escape a nuclear apocalypse. The measly door knob immediately flew off and the door was being held only by the tiny single bolt at the top, and the rest of the door flapped and shook like a sail in a hurricane.

The illogical part of my brain was going:

The logical part of my brain decided that if this was a burglar or an axe murderer, it was the worst burglar or axe murder in the history of time. The logical part of my brain also realised that if I didn’t do something pretty quickly, the door would fly off its hinges and whoever or whatever was trying to get in would burst through into my bedroom, the prospect of which was undesirable.

So I leapt towards the door, yanked aside the shutter, and came face to face with a guy in his mid-twenties.

In a tone and pitch I had never heard come out of my mouth – which I now know to be the ‘terror’ setting – I yelled ‘What the FUCK are you doing??? I DON’T KNOW YOU!!’

To which the guy replied ‘Holy shit – am I at the wrong place?’

With my heart having some sort of awful 90’s rave, I crept into Sarah’s room where I found her in bed clutching her sheets to her face.

After both agreeing we were shaken up like marbles in a cup but essentially okay, we heard voices from outside. I listened at Sarah’s French doors (she forbade me to go out onto the balcony) and heard the unmistakable sound of drunken arseholes from the pavement below. These drunken arseholes remained laughing and talking loudly for the next hour.

Using our combined training from years of watching True Crime documentaries, we came to the conclusion that our intruder was part of the group of guys staying in the apartment downstairs, who had clearly got absolutely wasted and locked himself out, and had mistakenly thought in his drunken stupor that our balcony was part of his apartment. Whilst this was fucking irritating, it was a relief to decide our intruder had not been a mad drooling axe murderer running amok on our street.

After a few fitful hours’ sleep, we awoke in the morning to the unmistakable sounds of drunken arseholes yelling and laughing in the hallway downstairs as they left for the day, presumably to go and get utterly bollocksed and drink each other’s piss out of pint glasses.

We called our Airbnb host, who turned up an hour later with two handymen. As we surveyed the scene on the balcony, I proudly showed them the exterior handle of Sarah’s French door that the drunken arsehole had yanked off the night before, and which I had spotted in next door’s gutter.

As we speculated how the hell the drunken arsehole had scaled our balcony, and one of the handymen exclaimed in awe that ‘Motherfucker’s got some upper body strength’, they repaired my broken French doors and assured us that, as they also owned the apartment downstairs, they would contact the drunken arseholes to give them a serious warning and to let them know that they had nearly caused the two women upstairs to give birth to their entire digestive systems.

We discovered from our host that the drunken arseholes were in the US Army, and were from out of town. This was ironic, considering that everyone we’d met on our road trip had warned us to ‘be careful’ in New Orleans as it could be ‘dodgy’ – where in fact we experienced nothing but friendliness and kindness from everyone in New Orleans, including the people on the street you might consider ‘dodgy’ – and here we were, having drunken out-of-town arseholes from the US Army getting smashed off their faces and trying to break into our apartment.

Our host left us with an assurance that we were perfectly safe, and that we would get some money back on our stay to make up for nearly dying of shock and terror. 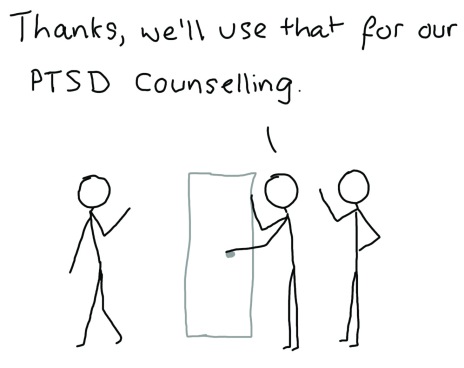 We then did what any normal human being would do when recovering from a heinous shock: we had shrimp in a hollowed-out baguette, and got horrendously drunk.

We hit the gay bars in Bourbon Street with a mathematically impossible 1,000% enthusiasm.

A brief summary of our night, in useful bullet points:

When we returned home at 2am it was all silence from downstairs, but we had not only forgotten about the drunken arseholes, it was entirely possible that we made so much noise clattering about and drunkenly laughing and dropping things that we woke them up. Whilst this would have been a satisfying payback, waking up and thinking ‘I wish those idiots upstairs wouldn’t tread so heavily’ is not quite on the same level as waking up and thinking ‘OH MOTHER OF GOD SOMEONE IS TRYING TO BREAK IN AND GUT ME LIKE A FISH.’

The next morning, Sarah was woken, not by someone trying to break into her bedroom, but by the sound of me retching into the toilet.

I did not feel well, my friends. Not well at all.

And so our road trip ended with us dragging our feet round the streets of the French Quarter, stopping briefly in a rainstorm to chat to a homeless guy (‘I don’t like Hilary Clinton, but you know, bitch was right all along about global warming’), and collapsing in front of the TV on our last night with some pasta and, bizarrely, the Downton Abbey Christmas special. 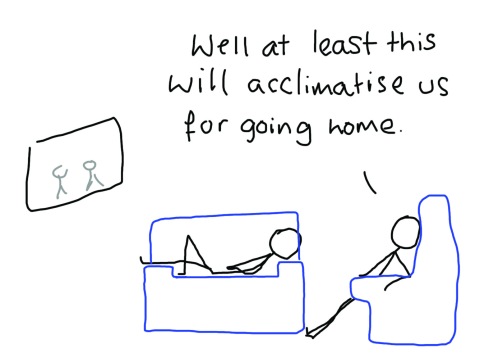 Conclusion: New Orleans is beautiful, generous, and super friendly. New Orleans is completely bonkers. If you go, go at the end of your trip, not the beginning. You will need all your strength to do it justice. And to kick the shit out of the drunken out-of-town arsehole that tries to break into your bedroom at 2am.